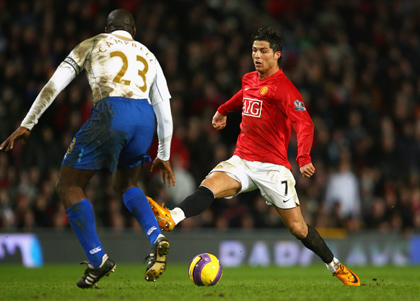 There are still a few games left but enough of the season has been played to establish which players have been the biggest hits in the Premier League and a short list has probably already been penciled in for the end of season awards.
Unitedâ€™s Ronaldo won a clean sweep of the accolades last season and, if anything, heâ€™s playing even better this season and will end up scoring more than 30 goals from midfield.
We think the best strikers this season have been Arsenalâ€™s Adeybaour and Torres at Liverpool. Adebayourâ€™s evolution has meant that Thierry Henryâ€™s name is rarely even mentioned anymore at the Emirates and who knows how many goals El Nino would have scored if he wasnâ€™t rotated?
There are a few other names in the frame but who would get your nod?

This seems to be the season when youth have come through with players like Fabregas and Anderson staking their claims for the best young player in the world. And, with Ashley Young and David Bentley, England have a couple of youngsters who also deserve mentioned.
Other players who might also get considered once the season is over are Evertonâ€™s goal scoring midfielder, Joleon Lescott, Spursâ€™ lethal partnership of Keane and Berbatov, Blackburnâ€™s cut-price Peruvian, Roque Santa Cruz and Svenâ€™s Brazilian surprise Elano.
Let us know who would be your player of the season.