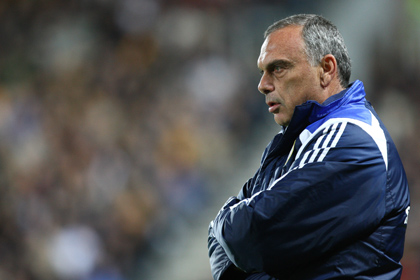 It seems like itâ€™s only taken one bad game for everyone including Chelseaâ€™s supporters to turn on their new manager Avram Grant â€“ but, is he really that bad?
Before the Carling Cup defeat, Grant had only lost two games in 34 matches including his in at the deep end debut against Man United. He was hailed for stabilising Chelsea and keeping them in Europe and the title hunt during a difficult time when half the squad was either out injured or away at the African Cup of Nations.
Then, the loss against Spurs saw him go from hero to zero after 120 minutes of football decided by a dubious penalty and a fortunate rebound for the winning goal â€“ would a â€˜bigger nameâ€™ manager have received the same treatment?

Jose Mourinho was always going to be a hard act to follow but despite 24 wins from 35 games in charge, Chelseaâ€™s success was said to come courtesy of the playerâ€™s attitude â€“ although itâ€™s a different story when the team loses.
Most Bluesâ€™ fans greatest gripe is that Grant has failed to win the big games â€“ he hasnâ€™t beaten any of the so-called Big Four in the league and got several decisions badly wrong in the cup final. And, Grantâ€™s promise of a more attacking brand of football hasnâ€™t exactly been kept.
But, he is still playing with what is largely Mourinhoâ€™s squad and this is his first season as a top-flight manager at a club that is always under the highest scrutiny.
Let us know if you think Grant is simply not good enough or if he needs more time to get it right.