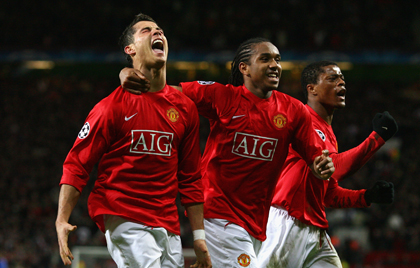 1. Simply the best?
That was Ronaldo’s 30th goal in as many games this season, which makes him top scorer in the Premier League and Champions League – if there’s a better player on the planet we’d like to know who…sit down Kaka.
2. Strength in numbers?
United were able to rest layers like Scholes, Hargreaves and Tevez and still win in second gear – will United’s strength in depth make the difference this season?
3. There’s no place like home
The win equaled Juventus’ Champions League record of ten consecutive home wins – is Old Trafford the strongest fortress in Europe?

4. There can be only one?
When Ronaldo shines, Rooney often fades – he missed three great chances last night despite his endless energy. Would the universe implode if they both played their best at the same time?
5. Could have been easier
Despite dominating for most of the game, United should have scored a second and it was only the woodwork that prevented the tie from undeservedly going to extra time.
6. Brown-nosing for a better deal
Wes Brown supported his case for a better deal with an inspired performance that included crossing for the goal at one end and making a saving tackle at the other – is that worth more than Â£55,000 a week?
7. Two faced Fergie
Despite his dour face during the post match interview there’s nothing more innocently charming than watching Fergie celebrate a goal with child-like glee.
8. Don’t call us, we’ll call you
United’s interest in Lyon stars Ben Afra and Benzema might cool down after the two youngsters suffered stage fright under the spotlights at Old Trafford.
9. Let someone else have a go?
As good as Ronaldo is, his monopoly on free-kicks is getting a bit predictable – especially since practically all of them find the first man in the wall.
10. Substance over style
Gone are the days of United’s gung-ho approach to European football. Fergie has followed the golden rules of not conceding at home and getting an all-important away goal if you can.