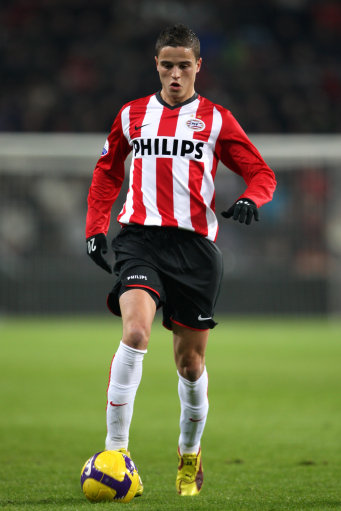 PSV midfielder Ibrahim Afellay (who may or may not be the lovechild of Jermaine Jenas and Cristiano Ronaldo) has admitted that he is still unsure as to where his immediate future lies, despite being heavily linked with a move to Barcelona this week.

However, one certainty is that Afellay will defintely be leaving Eindhoven this summer, after announcing that he will not be signing a new deal when his current contract with the Dutch club expires next July – finding himself reportedly targeted by a number of potential Premier League suitors in the process.

In an interview with Catalonian newspaper Sport, the highly-rated 24-year-old spoke openly about how enticing a move to Barca would be:

“I don’t know anything. I only know what I’ve read in the newspapers on the internet, but I still don’t know what my future will be because there are many options.

“At the moment I don’t think there has been contact between Barca and PSV. [Barca] are a fantastic club, a club everybody knows, with a team who plays really attractive football and who are one of the greats. But I insist that I still I don’t know anything about my future.

“The only thing I can do is to continue training as always and play the best I know how with my team, which is still PSV.”

When asked about the whether PSV may allow him to leave in January, Afellay again admitted that he was unsure:

“That’s a good question. For the club maybe it would be best in January because they will be able to get some money for the transfer.

“But it could also be a good option in June because our objective is to win the Eredivisie and for the team to play in the Champions League next season, which is also a great reward and allows you to earn a lot of money.”

One thing Affelay is sure about is that he finally feels he is ready for a fresh challenge outside of the Dutch league, after spending his entire career at PSV:

“Yes, that’s clear. The time has arrived to leave in order to continue growing. PSV is my home, but I must take a step forward in my career and I’m ready.”