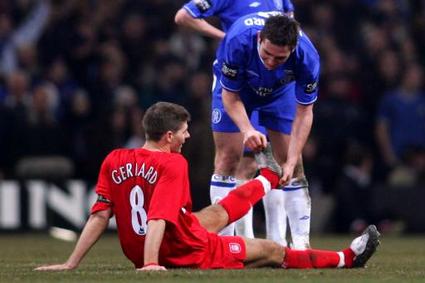 Chelsea’s Frank Lampard and Liverpool captain Steven Gerrard should both be fit for tomorrow night’s Champions League semi-final at Anfield. Which is nice. F365
Jose Mourinho has finally agreed to manage Inter Milan. Not only that, but he wants to snatch Frank Lampard and Didier Drogba from Chelsea. The traitor. The Sun

Neil Warnock is facing the threat of legal action from a furious Rafael Benitez. The Crystal Palace boss is still fuming over the Spaniard’s weakened team selection at Fulham last May where Liverpool lost 1-0 — a result which Warnock claimed sealed relegation for his then Sheffield United side. Rafa calls Warnock “prehistoric”, threatens to sue. Daily Mail
Cruz Beckham flips the bird. He’ll make a Prem footballer yet. Kickette
Paul Ince’s MK Dons, aka Franchise FC, earn promotion to League One with 3-2 victory at Stockport. Times