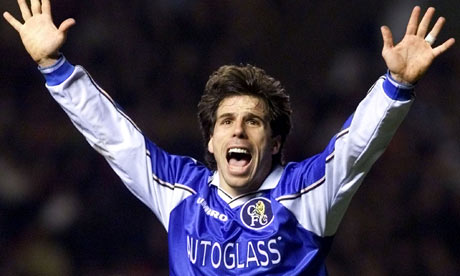 Chelsea have this morning begun their search for a new assistant manager after abruptly dismissing Ray Wilkins from his post during half-time of a reserve team game yesterday.

A few candidates are being suggested by various sources but one name that keeps cropping up again and again is that of Blues legend Gianfranco Zola, who has been out of work since having his contract terminated by West Ham back in May – although whether he’d be willing to make the ‘step down’ to assistant may be a sticking point.

Other potential contenders being touted for the sudden vacancy at Stamford Bridge include former Chelsea favourite Gus Poyet (who is currently in charge of Brighton), Steve Clarke (who served as both Zola and Jose Mourinho‘s deputy at West Ham and Chelsea respectively) and even AC Milan deity Paolo Maldini (a stalwart of Carlo Ancelotti‘s Rossoneri tenure) is being considered as an outside bet.