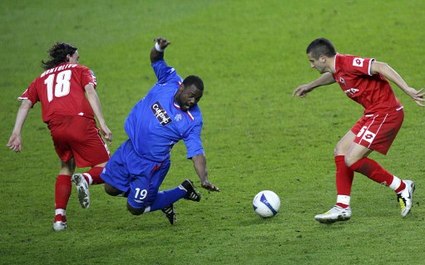 RANGERS 0-0 FIORENTINA
And still the Glasgow club keeps its hopes of a quadruple alive. They’ve been here before in this competition, namely in the quarter final, when they looked average in the first leg at home, drew 0-0, then stole a professional away victory, against Sporting Lisbon. Fiorentina are a better team than Sporting, so I’d say that this tie is now balanced 60-40 in the Italians’ favour. Fiorentina were much the better team for large chunks of the game, but Rangers’ defence held firm. As usual, it wasn’t pretty, but it was effective.
Rangers reaction “The away game’s going to be a totally different game. They’re going to have to come out and really have a go and it might open up for us. Our record in the away games has been fantastic. We know we can go there and score.” (Alexander, Rangers’ goalkeeper)
Fiorentina reaction “This result favours Rangers more than it does Fiorentina… It gives them the advantage and while we will get praise for the way we performed we didn’t do what we set out to do – get an away goal.” (Cesare Prandelli, Fiorentina coach)
Man of the match Carlos Cuellar. The SPL Player of the Year has another fine game at the back for Rangers.