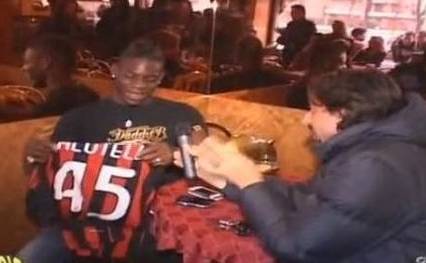 AC Milan are reportedly poised, prone and ready to try and spirit Manchester City striker Mario Balotelli back to Serie A, after a fairly underwhelming start to his career at Eastlands.

City paid Inter Milan £24-odd million for Balotelli back in August, but a knee ligament injury has limited his impact at Eastlands, despite managing to score three goals in his first four appearances for the club.

The 20-year forward, himself an unabashed AC Milan supporter, travelled back to Italy with his agent Mino Raiola to watch his favourite team triumph over his former employers in the Milan derby on Sunday evening – and, according to the Daily Mail, when asked if his client was happy in Manchester, Raiola merely replied: ‘so so’ (although I’ve got a sneaky feeling that this is an old-ish quote).

The Mail continues to cite swirling reports in Italy that are suggesting Milan are ‘working on a deal’ to sign Balotelli at the end of the season, with the Mediaset website (which is co-incidentally owned by Rossoneri owner Silvio Berlusconi) reporting that such a deal may already be in place.

Well, what do you make of all that hoo-hah then?