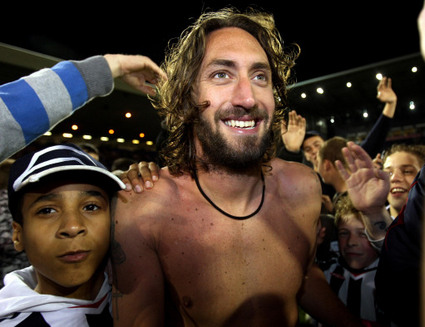 West Bromwich Albion’s Jonathan Greening is mobbed by fans after the club (effectively) secured promotion to the Premier League following their 1-1 draw against Southampton. West Brom’s superior goal difference would require Hull City to win their last game by more than 10 goals. Congrats to Tony Mowbray and his excellent team: they’ve been the best team in the Championship this season, as well as the most enjoyable to watch, and fully deserve to go up.
More news after the click, including the breaking news that Sven is set to be shown the door by Man City…

Sven-Goran Eriksson has been told he will be sacked as Manchester City manager at the end of the season. City owner Thaksin Shinawatra told Eriksson he was “not the right man for the job” at a meeting on Sunday, a source close to the Swede said. That’s quite a shock, especially given that City started the season so well and also did the double over Man Utd. BBC Sport
Manchester United players will reportedly tell club lawyers that Saturday’s post-match battle at Stamford Bridge escalated when a member of Chelsea’s staff called Patrice Evra a “f***ing immigrant”. F365
Blackburn Rovers striker Roque Santa Cruz has played down talk he could quit Ewood Park this summer and join Manchester United. Sky Sports
Former Bolton striker Mario Jardel has admitted taking cocaine and says drug abuse is common among footballers. The former Brazil international said depression and the decline of his marriage six years ago led him to use the drug. Daily Mail