Vote on which one is most likely to happen… 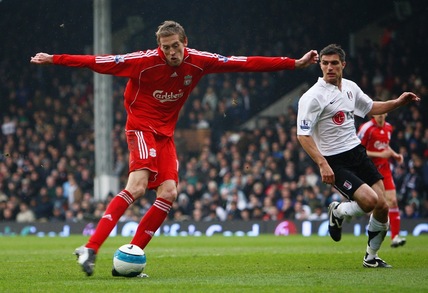 1. Peter Crouch to Villareal
Will Crouchinho (pictured) be playing in all-yellow next season? Perhaps, if Villareal can find Â£15m for the English beanpole. [KopTV]
2. David Bentley to Spurs
Juande Ramos is keen on bringing Blackburn’s English star to White Hart Lane, for Â£15m [The Sun]
3. Nicky Shorey to Newcastle Utd
King Kev wants to bring the relegated Reading left-back to Geordieland. [NUFC Blog]

4. Alan Smith to Middlesbrough
Boro boss Gareth Southgate wants Newcastle’s utility pitbull, especially now that he has ditched Fabio Rochemback, Gaizka Mendieta and Dong-Gook Lee. [Mirror]
5. Didier Drogba to AC Milan
The ever-loyal, ever-quiet Drog dreams of playing in red-and-black stripes. He also admitted that he talked to the Italian club two years ago, when Jose Mourinho was Chelsea manager. [The Sun]
6. Paul Robinson to Man City/Joe Hart to Spurs
Tottenham are lining up a Â£10m deal for City’s promising goalkeeper Joe Hart, with useless Paul Robinson moving in the opposite direction. [Daily Mail]
Six wholesome rumours for you to digest. But which one is most likely to happen? Vote below: