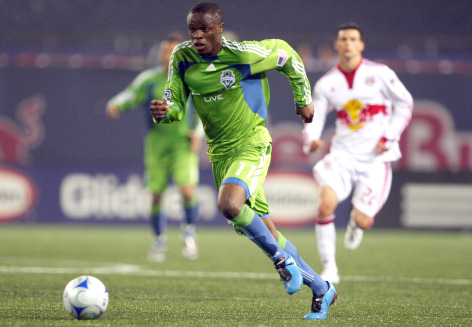 Seattle Sounders forward Steve Zakuani (who apparently models his hair on the Hampton Court maze) has revealed via the American side’s official website that he has been invited to train with Everton for a few days later this week.

The MLS season has just finished (congrats to the Colorado Rapids, who clinched their first ever title with a 2-1 extra-time victory over Dallas), freeing up it’s players to pursue European loan/training ventures, as LA Galaxy poster-boy Landon Donovan did with the Toffees this time last season.

Zakuani was born in Kinshasa, DR Congo, before moving to London to begin his footballing career with Arsenal.

He was released in 2002 for being too ‘cocky and brash’ for the Gunners’ taste, so the young forward opted to move to America, where he has since blossomed into one of the brightest prospects in MLS.

“As for my off season plans, I plan to spend a few days in London visiting old friends and family before going up to Liverpool to train with Everton for a few days.”

Can’t say I know an awful lot about this boy Zakuani, other than he sounds a little rough around the edges according to most reports – which is forgivable seeing as he is only 22-years-old.

Can any of our more MLS-savvy readers enlighten us? Would it be worth Everton taking a punt on him, considering that goals from actual strikers are a little thin on the ground at Goodison of late?