Monday’s most attractive transfer gossip. Surely one of these might happen? 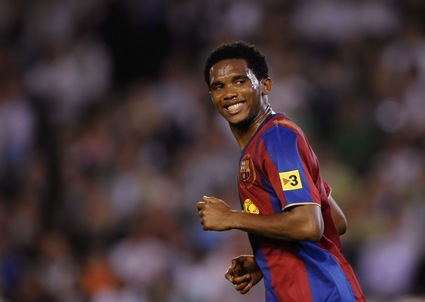 1. Samuel Eto’o to Spurs
Tottenham have outbid Italian giants AC Milan and Inter for the mouthy Barcelona striker (pictured). The Yids will go up to Â£24m for the Cameroon international – that’s Â£8m more than the Italian sides are prepared to pay. [Epping Forest Guardian]
2. Dean Ashton to Spurs
Tottenham have expressed an interest in the unsettled West Ham forward. It’s thought that West Ham boss Alan Curbishley will listen to offers around the Â£12m mark. [Football Corner]
3. Albert Riera to Liverpool
Reports in Spain claim Rafa Benitez is preparing an Â£8m raid for 26-year-old Espanyol winger Albert Riera, who made 15 appearances for Man City during a loan spell in 2006. [Fans FC]

4. Arda Turan to Newcastle Utd
Kevin Keegan is eager to win the race for the highly rated Galatasaray winger; Middlesbrough and Tottenham have also shown an interest in the 21-year-old, but reports suggest Keegan is in pole position to wrap up an Â£11m deal.
5. Roque Santa Cruz to Arsenal
Arsene Wenger wants a piece of the Blackburn Rovers and Paraguay striker – but only if Arsenal lose Emmanuel Adebayor in the summer. [Times]
6. Stewart Downing to Liverpool
Rafa Benitez will bid Â£12m for Boro’s star winger, essentially as a replacement for the useless Harry Kewell. [Square Football]
Some big names involved in today’s rumours. But do you believe any of them? Vote below: