Thierry Henry to Spurs? Surely not… 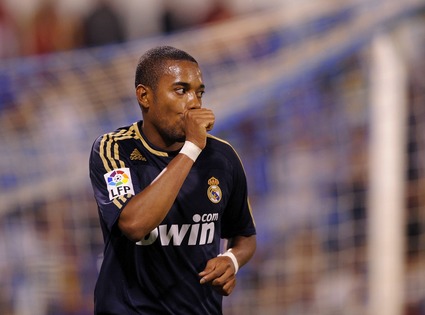 1. Robinho to Chelsea
The Real Madrid star’s agent has flown to London to generate a transfer to one of the Premier League’s big boys, and Chelsea are front of the key. Real are reluctant to sell, but that will count for little if the pint-sized Brazilian wants to move. [Telegraph]
2. Thierry Henry to Tottenham
According to a Spanish cabbie, Juande Ramos has been in Barcelona hoping to lure Henry back to north London. The driver claims he heard Ramos accepting defeat in the race of Samuel Eto’o and turning his attention to the ex-Arsenal man during telephone conversations he overheard while the Spurs manager was in his car. [Tribal Football]
3. Gregory Coupet to Tottenham
Juande Ramos’ lack of confidence in Paul Robinson is well documented and he wants to bring in French international Coupet as his first-choice keeper. The Spurs boss is preparing a Â£2.5 million deal with Lyon. [The Sun]

4. Maik Taylor to Everton
The veteran Birmingham keeper is wanted by Everton to provide experienced cover for Tim Howard. The 36-year-old is reported to want regular first-team football though. [Liverpool Daily Post]
5. Younes Kaboul to Portsmouth
The Tottenham flop has been discussing the possibility of retiring to the south coast through the age-old French transfer generator that is L’Equipe. The centre-back is quoted as saying he wished he had left White Hart Lane in January. [Tribal Football]
6. Stephen Ireland and Richard Dunne to Sunderland
The Manchester City duo are to be offloaded by Dr Evil as he generates funds to move for Zenit St Petersburg’s Andrei Arshavin. [Sunderland Echo]