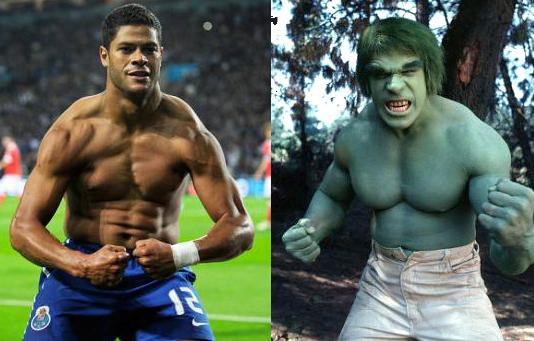 According to reports in this morning’s Daily Mirror, Manchester City are preparing to ‘flex their financial muscle’ by attempting to lure Porto’s headline-friendly striker Hulk to these shores in January – with a £20 million offer already thought to be in the pipeline.

After suffering a stop-start season in Portugal last season due to various  injuries and suspensions, Hulk has been banging them in for fun in Porto colours this season – netting 16 times in as many games.

With Carlos Tevez having scored almost half of his side’s goals this season, City manager Roberto Mancini is understandably keen to remove some of the goal-scoring pressure from the Argentinian’s brawny Latin shoulders.

Mancini was understood to have placed Wolfsburg target man Edin Dzeko at the top of his winter wishlist, but it seems that even Sheikh Mansour – with his bottomless vat of petro-dollars – cannot justify meeting the Bundesliga club’s extortionate £50 million valuation of the Bosnian.

A few months back, Hulk told the Portuguese press that he was happy to concentrate on his form at Porto, but the agent that represents the powerful Brazilian forward, Teodoro Fonseca, is understood to be keen on securing his client a lucrative Premier League contract – and Premier League contracts don’t get much more lucrative than the ones they dole out at Eastlands.