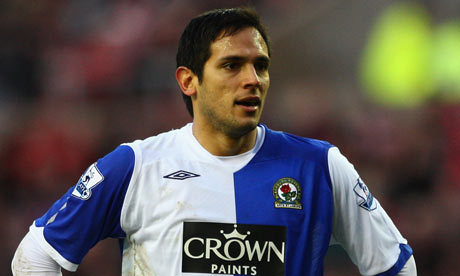 Blackburn’s new owners Venkys are set to hand manager Sam Allardyce an £8 million ‘war chest’ to fritter away in the January transfer market as he sees fit, with roughly half of the cash already being put aside to fund a move for former Rovers striker Roque Santa Cruz, now of Manchester City.

Santa Cruz has now become little more than a ‘seat filler’ at City since moving to Eastlands for the ridiculously inflated fee of £17 million a year-and-a-bit ago, and with the club intent on thinning out their squad over the winter, it’s thought that as little as £4 million will be enough to entice them into selling the stunted Paraguayan.

If Santa Cruz can recapture the form that he showed during his first stint at Ewood, then surely £4 million would be a pittance to pay for the privilege – especially as the £3.5 million that Mark Hughes paid Bayern Munich for his services is generally deemed to be up amongst the best transfer business conducted in recent seasons.

That said, thanks to a series of crippling knee knacks, the 29-year-old is pretty much a shadow of the bustling target man that he was back in 2007/08 – although I have the sneaking suspicion that he may still have a few goals left in him.

Worth a calculated gamble?