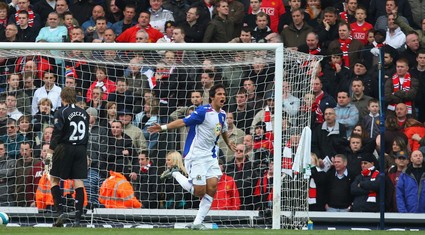 1. Roque Santa Cruz to Manchester United
Sir Alex Ferguson is to take advantage of Blackburn’s imminent loss of a manager to bid Â£15 million for their star striker. The move would represent a tidy return on the Â£3.5 million Rovers spent on the big Paraguayan last summer. [The Sun]
2. Roque Santa Cruz and David Bentley to Manchester City
On the other hand, Mark Hughes will bid to take Santa Cruz and Bentley to the blue half of Manchester as he takes over the reigns at Man City. [Mirror]
3. Frank Lampard to Inter Milan
Jose Mourinho is desperate to make Lampard his first signing as Inter Milan coach. The Special One will ask Inter’s board to approach Chelsea to sign the England midfielder. [Guardian]

4. Sam Allardyce to Blackburn
Former Bolton and Newcastle boss Sam Allardyce is being lined-up by Blackburn to replace Manchester City-bound Mark Hughes. The 53-year-old has cut short a family holiday to begin discussions. [Goal]
5. Pablo Aimar to Newcastle
Newcastle will off former Argentinian golden boy Pablo Aimar the chance to relaunch his career in the Premier League. He is out of favour at Real Zaragoza and is available for around Â£4 million. The Magpies see him as the perfect replacement for outgoing playmaker Emre. [Setanta]
6. Aaron Ramsey to Manchester United
After much speculation, the champions are reported to have tabled a Â£5 million offer for Cardiff City youngster Ramsey. The Red Devils are one of three clubs to have made a bid for the 17-year-old. [BBC]