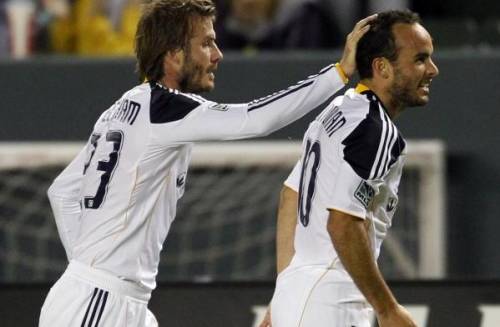 Despite swirling speculation to the contrary, LA Galaxy star and bid-backer par excellence David Beckham has ruled out a loan move to Everton in January – saying that a move to Merseyside would be ‘too close to home’, what with him being a staunch Manchester United fan ‘n all.

Toffees boss David Moyes (who briefly played with Becks at Preston in 1995) was hoping that a move could be pushed through, with Beckham’s considerable wages being offset by the inevitable up-shoot in merchandise sales.

However, in an interview with Sky Sports News, Becks admitted that his club loyalties won’t allow him to up sticks to Goodison during the MLS off-season:

“It’s always great to be wanted, whether it’s on loan or a permanent deal, I’ve got great respect for David Moyes having played for him at Preston.

He’s done an amazing job at Everton but I’m a Man United fan — it’s too close to home.”

That said, Beckham’s Galaxy team-mate Landon Donovan has opened the door for a return to Everton, after spending a highly successful loan spell at the club last season.

Whilst in Zurich to promote the USA’s 2022 World Cup bid, Landy said:

“I want to go back to Everton. How could I not after last time? But I have to be responsible to my body. I would say it is 50-50 at the moment.

“I have had two weeks off and if my body feels better I would say there is a good chance, but if I still feel tired then we will have to see.”

Which is probably good news if you happen to be of the blue-hued Scouse persuasion.