Mourinho wants Lamps for his new gang. No, Jose, no. 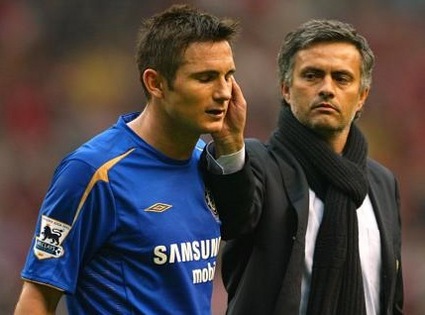 Of all the players in the world that Inter could have at the top of their summer shopping list, they choose Frank Lampard. Does Frank have secret photos of Jose Mourinho doing unnatural things with John Terry?
Inter’s president, Massimo Moratti, confirmed this week that the English midfielder is their “No1 priority” in the transfer market. “Everybody considers Lampard a great player, but this doesn’t mean that signing him will be easy,” said Moratti. “We like him, though, and he’s our No1 priority. Mourinho likes Lampard a lot. We all know that he can be a great player with us.”

“Mourinho likes Lampard a lot.”
That’s the key sentence. Jose misses Frank, clearly, but I doubt that Inter are too bothered about signing the Englishman, who turns 30 next week, and won’t sell them many shirts.
If it’s easy to mock Lampard, it would be one-eyed not to recall that he had a couple of immensely impressive seasons under Mourinho. I’d much rather take Michael Essien from Chelsea, or Didier Drogba (and then leave him to rot in the reserves, just for kicks), but Mourinho’s judgment must be trusted – he knows that Lampard is a fine professional, and more open-minded than most of his compatriots.
I think Inter could spend their money more wisely, but who am I to argue with the Special One?