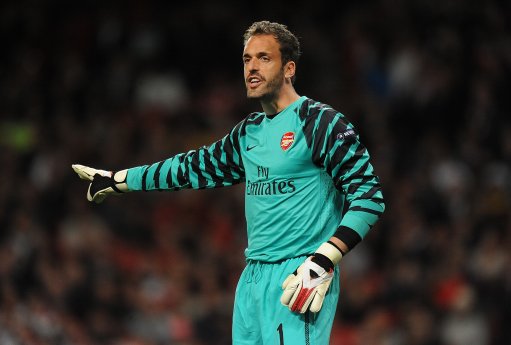 Bit of an iffy source on this one, but word on Pies Street is that Arsenal have taken goalkeeper Manuel Almunia to one side and told him that he will be free to leave the club in the January transfer window.

Almunia’s current deal expires in the summer of 2012, but Arsenal are reportedly willing to offload the 33-year-old for a bit of cash (approx £1-1.5 million) while they still can – rather than offer him a new contract when the time comes.

A couple of Spanish clubs are known to be interested, with Atletico Madrid thought to be keen on replacing the outbound David De Gea with a cheaper alternative, as well as Valencia and former club Osasuna mooted to be hovering.

Hmmm. Entirely plausible, if not a little on the speculative end of the ‘transfer toss’ spectrum. What do reckon? Is this one a go, go, go-er (sell the useless bugger), or a no, no, no-er (keep him as back-up)?