Hleb, Flamini, Diarra and possibly Adebayor off to pastures new? Why do Arsenal’s best players want to leave? Here are a few reasons why… 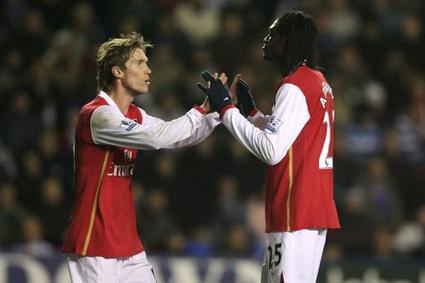 1. A rigid wage structure
Rightly or wrongly, Arsenal has a wage structure that it’s not prepared to mess with. In theory, that’s a good thing – if every other club follows suit. But because bigger, richer clubs than the Gunners don’t have such a structure, it leaves their best players vulnerable to big-cash bids. Witness AC Milan’s courting of Adebayor. I’m sure Adebayor would be more than happy to stay at the Emirates, but not if he doesn’t get the money he’s looking for.

2. Arsene Wenger is not as nice as he makes out
Many footballers have hailed Wenger as a dream manager to work for – he’s intelligent, liberal, generous etc. And he likes to play proper football. But when Freddie Ljungberg came out in the press and said that the real Wenger was more of a dictator than his public persona suggested, it made you wonder about some of the departures from the club. If Wenger really had Arsenal’s best interests at heart, would he have allowed Mathieu Flamini and Lassana Diarra, two of the most promising young defensive midfielders in Europe, to leave? Perhaps Monsieur Wenger is as inflexible as Arsenal’s wage structure?
3. They’re not winning things
Footballers like cash and WAGs and fancy cars – but above all they like to win things. Arsenal haven’t won a trophy since the 2004/05 season. A stat like that makes them less appealing to ambitious, top-class players.
4. The media won’t let go of a good rumour
Lazy sports hacks (that’s me, too) love nothing more than a good transfer rumour. They’ve been banging on about Alex Hleb going off to Barca, or Inter, for months now. Give it a rest already – it may shift papers, but it also destabilises the club.
BREAKING NEWS I see that Adebayor has just announced that he is in fact staying at Arsenal for next season. Which is great news for Gooners, and hopefully puts an end to the bullshit being spouted by awful “super agents” like Vincenzo Morabito.