Jose wants Lamps and the Drog. Surely JT is the man he covets most? 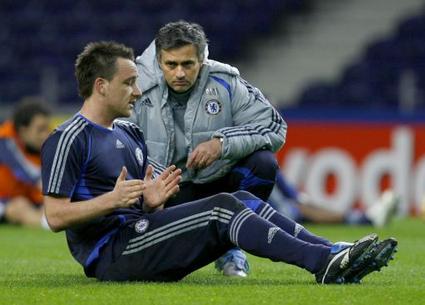 When British newspapers made up rumours about new Inter boss Jose Mourino wanting to poach Chelsea players, the two they concentrated on were F-Wank Lampard and The Drog. No mention of John Terry, strangely.
Could Mourinho tempt JT away from Chelsea? Well, if Drogba and Lampard are realistic targets (they are), I don’t see why the Special One wouldn’t want to sign the man who was his brave, stout captain. Terry would doubtless demand Â£150k a week, but Inter could afford that.
It depends which central defenders Mourinho would want to sell, and which ones he plans to keep. Inter are currently very well-served in that position, with Ivan Cordoba, Nicolas Burdisso, Javier Zanetti, Marco Materazzi, Nelson Rivas, Walter Samuel and Christian Chivu all able to play in the heart of defence. Two or three of them would have to be sold to make way for Terry – Samuel and Materazzi, for example. But it could happen and Mourinho would surely like it to happen… that’s why I made it up.