Belarusian finally gets his way 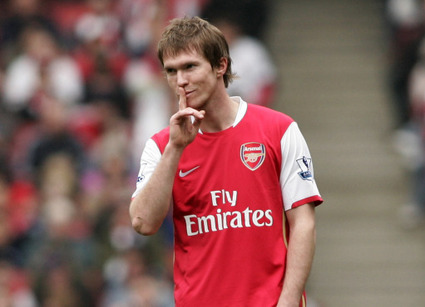 Alexnder Hleb underwent a medical at Barcelona today, ahead of his Â£11.9m move to the Camp Nou. Unless one of Hleb’s legs falls off, the deal is in the bag. Barcelona confirmed the deal for the 27-year-old Belarusian and he arrives as Ronaldinho travels to Italy for a medical with AC Milan. Let’s hope the sensitive Hlebster enjoys the peace of Barcelona village and the tranquility of the Spanish football media.
That’s the only big news of the day in terms of concrete transfers – unless you’re interested in the news that Bobby Zamora has signed for Fulham. I’m not that interested to be honest, although I feel there was no need for West Ham to let a decent squad player like Zamora go.

Do you think Arsenal will miss Hleb? I guess Samir Nasri and a fit Tomas Rosicky (a rare thing indeed though) can help to fill the gap he leaves. I think they will miss him though – he was improving every season, and it seems likely that he would have improved further in the Premier League this season.
If Gareth Barry is worth Â£18m, then I think Barcelona have a very good deal in getting Hleb for less than Â£12m.