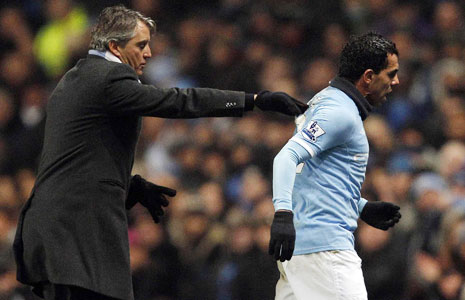 A statement from the club read:

“It is with disappointment that we confirm to our supporters that Carlos Tevez has submitted a written transfer request. The club can also confirm that the request has been rejected.

“The club remains disappointed by this situation and particularly with the actions of Carlos’ representative.

“Roberto Mancini and all at the club have shown, and will continue to show, sensitivity to Carlos’ personal circumstances including the issue of his family being based overseas.

“Indeed following his suspension as a result of the game against Bolton, Carlos requested, and was given, special dispensation by the manager to take leave overseas.

“The written transfer request is in stark contrast to Carlos’ stated position in both public and club contexts.

“Significantly, over recent months, the club has also received numerous requests from Carlos’ representative to renegotiate and improve his playing contract as well as more recently a request to extend that contract by another year.

“However, in line with the club’s policy of not negotiating playing contracts mid-season this has not been granted.

“Carlos’ current five-year contract has three-and-a-half years to run and he is the highest-paid player at the Manchester City Football Club.

“This is both an unfortunate and unwelcome distraction and the club will remain focused on the games ahead in what is turning out to be a very promising season. The door remains open for Carlos to be selected to play.”

Tevez is worth the trouble, apparently. But what happened to clubs keeping this stuff in the dressing room? Looks like Fergie’s very public re-raise re: Rooney has played some part in City’s decision to front up Tevez and his agent. Your move, Carlos…

I utterly sympathise with Tevez if he pines for home and especially his young family. But I also say, hang on a tic, Tevez is being unprofessional here; he lives and works in England – and is paid more than handsomely to do do – and it’s his decision to do so. It’s also Tevez’s choice to live thousands of miles away from his daughters. He can change that situation easily, though of course I understand if he doesn’t want to disrupt his kids’ lives in such a massive way.