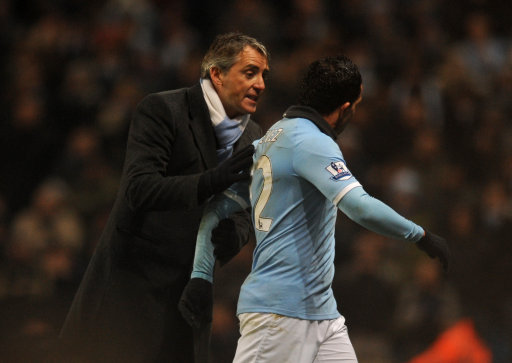 Having seen a written transfer request knocked back on Saturday evening, Manchester City striker Carlos Tevez remains adamant that he will quit the club sooner rather than later – citing ‘irreconcilable differences’ between he and certain club executives (who he claims have painted him as, heaven forbid, some kind of cash-grabbing mercenary) as the main catalyst behind his decision to force a move from Eastlands.

In a statement, Tevez said:

“It is something I have felt for some time and have spent many hours thinking this through.

“I hugely resent suggestions that I have been unduly influenced by others. I wanted to leave in the summer, but was convinced to return. Sadly, my feelings have not changed.

“I am disappointed that the management should now see fit to try to portray the situation in another light.

“My relationship with certain executives and individuals at the club has broken down and is now beyond repair. I do not wish to expand on this at this stage. They know, because I have told them.”

I’ll have a shilling on one of the homesick Argentine’s chief antagonists being perennial scheister Gary Cook, who seems to have the innate ability to upset almost everybody he comes across.

Anywho, it seems City may be about to deal with the hiccup in the only way they know how – by chucking wads of cash at the problem and hoping it goes away.

Reports this morning are suggesting that City are now preparing to offer Tevez a new two-year (thus reducing the time he is bound to the club by 18 months), £325,000-a-week contract and/or a one-off payment of as much as £5 million in a bid to persuade the forward to stay on at the club – presumably until he pulls the exact same stunt around July time.