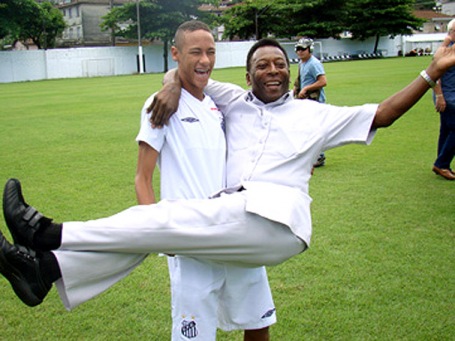 Having been a near-constant fixture on the radars of Europe’s elite since the age of 13, Santos’ wünderkind Neymar has found himself linked with big-money moves to all and sundry on a consistent basis for at least the last couple of years.

Neymar, now aged 18, reportedly came to within a gnat’s knacker of joining Chelsea over the summer and after super agent (and Chelsea rep) Pin Zahavi was spotted chatting to the player’s agent Wagner Ribeiro in Brazil rumours have been flying that a deal may have been struck to take the prodigious Brazilian forward to Stamford Bridge in January.

However, Ribeiro insists that no such deal has been struck and that his client will not be leaving Santos until 2012 at the earliest – telling a Brazilian website:

“Zahavi is a personal friend and only travelled to Brazil to escape from the European winter. The chance that Neymar will leave Santos for Chelsea in this season (2010/2011) are zero per cent.

“Neymar wants to play the Copa Libertadores with Santos. If we wanted go abroad, he wouldn’t have even been here, I speak every day with Santos’ chairman and I can say that Neymar won’t go anywhere until the 2012 Olympics.”