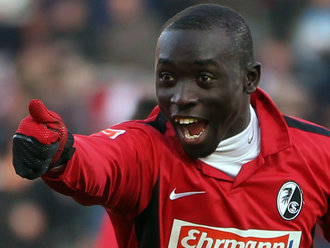 I feel I should issue a prior warning that this one comes by way of Goal.com, so anyone who finds their particular strain of blanket, ‘see what sticks’ football coverage a little rich is advised to get out while they still can.

Anyway, the site are reporting this afternoon that the Bundesliga’s joint-top scorer, Freiburg’s £10 million-rated Senegalese striker Papiss Demba Cisse, is angling for an ‘interesting’ January move to Arsenal having already spurned the advances of Fulham in his quest to join one of the Premier League’s London-based Champions League contingent.

A source close to the player (possibly his agent, possibly Goal’s work-experience office monkey) apparently had this to say:

“There’s no mistaking he’s very happy at Freiburg and he’s under contract until 2014, but Arsenal certainly interests him.

“Fulham is not an option. All respect to the club, regardless of whether they can afford him, he wouldn’t want to go.

“Freiburg are a great but small club so it’s very likely he will go in the summer. And Cisse is worthy of Champions League football, that is what he’s aiming for.”

From what I’ve seen (admittedly just a few grainy Youtube videos) Cisse looks like a decent enough striker, though probably not ‘worthy’ of Champions League football quite yet.

It’s also a definite push to describe him as being of ‘Arsenal quality’ in so much as he doesn’t look like he’d offer anything that either Nicklas Bendtner and/or Carlos Vela would do should they be given runs in the first-team.