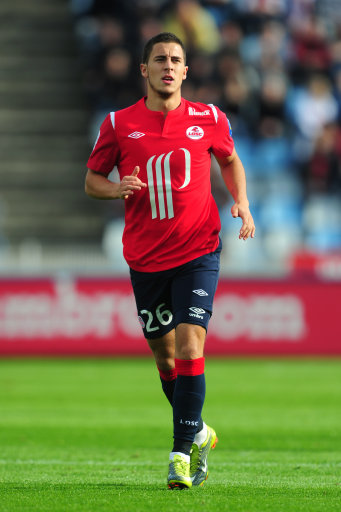 The 19-year-old forward has admitted that he turned down the chance to leave the Ligue 1 side six-months ago, with reported overtures from Real Madrid failing to pique his interest:

“I could have gone last June, but I was not ready to make that big leap.

“Recently the press have been writing about interest from Liverpool, and it is nice to hear your name being mentioned everywhere, especially with the best teams in the world.”

Hazard continued, admitting that limited first-team opportunities at the Bernabeu have put him off moving to the Spanish capital:

“If I do leave at the end of the season, I don’t want to go somewhere where I will be on the bench.

“I am young, not 20 until next month, and it will be difficult to break through in a team like Real, where (Cristiano) Ronaldo and Kaka are my competitors.”

With Madrid out of the question, Hazard seems intent on joining a lesser light who’ll rush any old crap into their first-string:

“But there are teams like Arsenal, where youngsters can grow more easily into the first team and make their mark.

“I will not leave for another French club, because, with 100 matches under my belt for Lille. I don’t think I have to prove my qualities for a team in the same league.”

You would be wise to not let this one get away Mr Wenger.