Wenger wants Liverpool midfielder, but not for Â£18m asking price 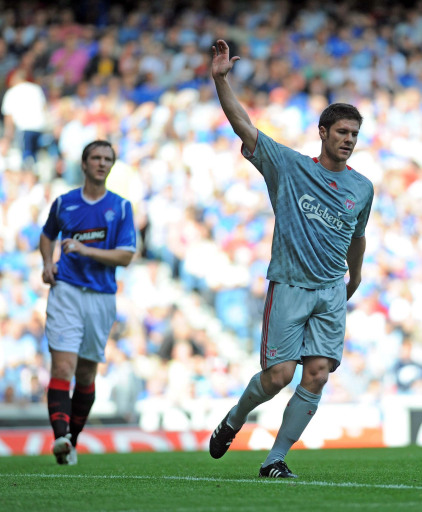 If Gareth Barry arrives to Anfield (90% certain now), Rafa Benitez will probably let Xabi Alonso go to Arsenal. And he should.
Liverpool are asking for Â£18m for the Spanish midfielder, a frankly silly price which Arsene Wenger is reluctant to pay, rightly. Alonso’s value may have increased slightly since he was purchased for Â£10.5m from Real Sociedad in 2004, but not by that much.
He is, after all, not a first-choice player at Liverpool. It seems that Rafa has decided that Alonso is not quite good enough – a decision he also came to regarding Peter Crouch. Benitez would have like to kept Crouch as a back-up striker, just as he would like to keep Alonso as a back-up midfielder, but he must balance the books – and these are international players who crave first-team football.

I must admit I always thought Alonso was overrated, by Liverpool fans and sections of the media, both of whom love to drool over his exquisite passing range.
Sure, Alonso can pass a ball better than most of his peers (better than Steven Gerrard, for example), but he lacks the speed, dynamism and athleticism to thrive at the sharpest end of the Premier League. In other words, he can pass but what else is there to his game?
A message to optimistic Arsenal fans who think that Alonso would be the ideal replacement for Gilberto and Mathieu Flamini: Alonso is more like Fabregas than those two, so I’m not sure how well they would link-up in central midfield, especially in club football.
Arsenal need an enforcer to protect Cesc. Xabi is not the man they need. But still, Rafa should accept anything upwards of Â£12m for a player who flatters to deceive.