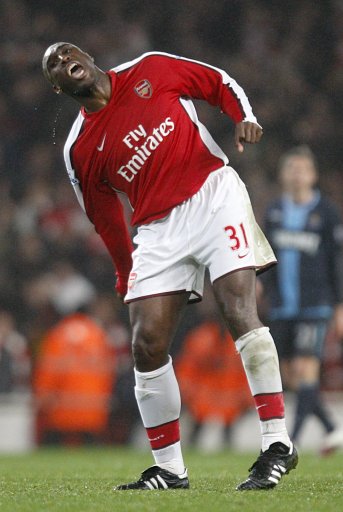 With Sebastien Squillaci twanging his hamstring against Leeds over the weekend, the number of senior centre-backs that Arsenal currently have at their disposal stands at two – and that’s if you’re willing to count Laurent Koscielny.

Squillaci is expected to miss the next few weeks and, with that factoid in mind, manager Arsene Wenger had reluctantly admitted that he may have to dip into the Gunners’ rainy day fund and bring in some long-overdue defensive cover:

“If we only have two centre-backs then that cannot work with the number of centre-backs we have. If Squillaci has a problem then we must quickly go out for a player.”

Long-term linkees Gary Cahill, Phil Jagielka and Per Mertesacker have, as per, already seen their names emerge as potential targets, though the Daily Express seem fairly certain that an altogether more under-whelming candidate may be in line for a shock return to the Emirates in the increasingly portly guise of veteran ambler Sol Campbell.

Apparently Sol is unhappy with his peripheral lot at Newcastle and Wenger, enticed by the prospect of a free transfer, may move to re-sign the former Gunners defender on a short-term deal, similar to that which he signed at the arse-end of last season.