Madrid already in talks to make Wenger their new boss 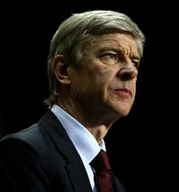 According to Guillem Balague’s website, Real Madrid have “set wheels in motion” to sign Arsene Wenger as their new manager. Balague writes:
“An alternative source claims that Wenger has spoken personally with Florentino Perez last week, possibly by telephone: with further conversations set to take place in the next couple of days. Following these initial conversations, Florentino Perez has come to the conclusion that Arsene Wenger is ready to join Real Madrid.”
I don’t know how reliable this source is, but I do know that Wenger appears disillusioned, if not with Arsenal directly then certainly with the way he and his team is treated.

The Frenchman complained this week:
“You sit here, you are in the last four in Europe, and every day you feel you have killed someone. It is unbelievable. If you do not take a distance with it, you think: ‘What kind of world do we live in?’ We lose against Man United who have ten times more resources… it’s not a shame.”
Strong words, and after another season without silverware, I’m not surprised that he’s fed up -Â even if I think he has made significant mistakes, particularly in not signing more experienced players in the last two transfer windows.
Every working relationship runs its course, and while I think Wenger still loves being the manager of one of Europe’s top clubs, the chance to take the reins at the richest club in the world must be very, VERY tempting.
Arseblog makes an excellent point about Wenger’s state of mind:
“One final thing which should not be overlooked – Real Madrid are sharks, they can sniff blood in the water and will take advantage of that. We know that Perez is unscrupulous and practically villainous so there are no depths to which they won’t stoop. They’ll want to make the most of the confusion/ill-feeling at the club and using the press to do that is their principal tactic, something we should all be aware of.”
That’s about as accurate a portrayal of the way Madrid operate as I’ve read. We’ve seen as much throughout the whole Cristiano Ronaldo saga, but if Wenger wants to leave, there’s very little Arsenal can do to prevent it happening.
Is the time right for Wenger to go? If he leaves, who wins -Â Arsenal or Madrid? Both?