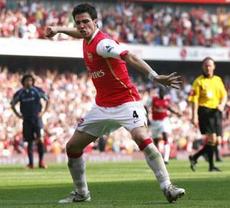 “Why Arsene Wenger may decide to cash in on Cesc Fabregas this summer.” Or, why the Mirror will write any old tosh to bait Gooners (ah, there’s a paper after Pies’ cold heart).
A Mirror hack called Steve Stammers (seriously?) penned an article about how Arsene Wenger might consider selling Cesc Fabregas (Arsenal’s best player, last time I checked – though Andrey Arshavin and Robin van Persie might dispute that), if the price is right; the right price being something in the Â£40m ballpark.

I reckon the only club Fabregas wants to go to is Barcelona, and he wouldn’t even get in their first team (which really does illustrate the gap in talent between Barca and Europe’s other top teams), thanks to the presence of the godlike Xavi Hernandez and Andres Iniesta.
Fabregas didn’t have a great season, but he was injured for part of it, and he needs more support. Selling him would be a great mistake on Wenger’s part, and I’m sure the thought hasn’t crossed his mind, no matter what the Mirror says.