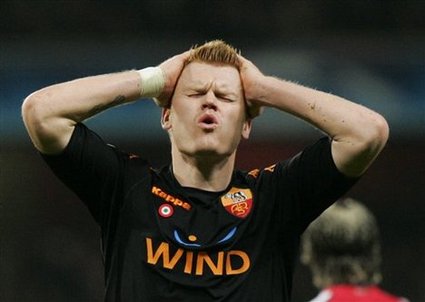 Ooh, that hits the spot
Sylvinho’s contract with Barcelona ran out at the end of last month, and the club decided not to re-sign him – so the veteran full-back, 35, is now a free agent.
Which means Barca need a new left-sided defender as back up for first-choice LB, Eric Abidal. Sport.es claims that the new European champions are looking closely at John Arne Riise, currently doing his thing for AS Roma. The Norwegian would be allowed to leave the Serie A side for around Â£3m. He’s a “safe bet” and a relatively cheap one too.
Riise isn’t the first name I’d associate with Barcelona but as a back-up LB, I’m sure he’d do a perfectly decent job. I still think it’s a shame he left Liverpool under the cloud created by that infamous slip-up in front of the Kop against Chelsea.