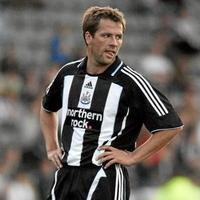 “Were it not for an unhappy spell at Real Madrid and two injury-scarred years at Newcastle, he would be spoken about in the same breath as Torres and Ronaldo and valued in the priceless figures that only match-winning goalscorers ever justify.”
This is perhaps the best quote from a 30-page begging letter brochure, produced by the Wasserman Media Group (which represents Michael Owen) to tell clubs why they should take a chance on Newcastle United’s injury prone striker. Owen’s Newcastle contract expires at the end of this month, leaving him free to pick a club. Unfortunately for Owen, his appeal is not what it was.

WMG produced the glossy brochure to help convince the likes of Everton, Aston Villa, West Ham and Man City – all of whom have expressed an interest in signing Owen – that Owen is actually a thoroughbred in the same class as Senor Torres and Senor C-Ron, and not, as some people suspect, a past-it crock.
Has it come to this? Poor Little Michael.
It’s all to easy to shoot a fish this big in a such a small barrel, but I do have some sympathy with Owen. After starting his career on such a high, it’s been sad to see his career wrecked by injuries. We all know even a fit Owen isn’t in the same class as men like Torres and Ronaldo, but who knows what he might have achieved had he remained injury free.
Many thanks to David Allison for the tip.
Sh*t Lookalikes: Michael Owen and Jason Manford