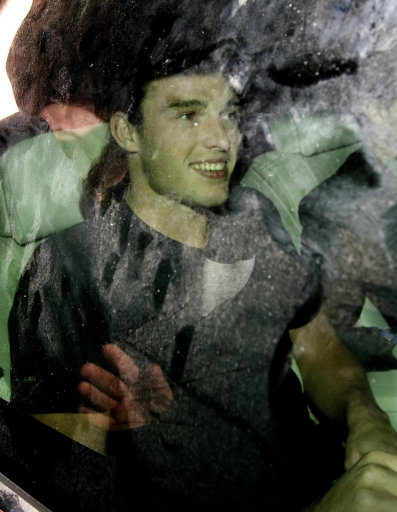 A ‘gutted’ Andy Carroll has reportedly claimed that he was ‘pushed out the door’ at Newcastle yesterday, despite all and sundry reporting that the 22-year-old had submitted a transfer request to help grease the wheels of his £35 million move to Liverpool.

The Daily Star have ‘obtained’ text messages sent by Carroll to Steve Wraith, editor of fanzine Toon Talk, in which he seemingly admits that he had little to no say in becoming the subject of the eighth biggest transfer of all time.

Carroll is alleged to have agreed to let the Star publish the texts, to air ‘his side of the story’.

The texts were sent between 13:00pm and 16:00pm, just after Carroll had been informed that Newcastle had accepted Liverpool’s renewed, £35 million bid for his services:

Text Four: “Gutted to be leaving, but I was kind of pushed out the door.”

Text Five: “Just what I’ve just said really. Gutted to be leaving my home club but I was practically told to go. Don’t want to leave. that’s why I signed 5 year deal.”

It’s hard to feel empathy toward Carroll given his past misdemeanours, though I get the impression that he’s not just covering his proverbial in preparation for the next time he decides to have a shandy or two down the Bigg Market.

On the other hand, it would be equally naive to suggest that the promise of £80,000-a-week wouldn’t do strange things to a home-town heroes’ undying loyalty.

Of course, at £35 million, I’m not 100% sure if I’m still asleep or not – so this could all just be a projection of my dormant mind. The world seems to have taken on dreamy, ethereal hues after yesterday’s madness marathon.

UPDATE: Newcastle boss Alan Pardew has countered this morning, telling the Shields Gazzette that Carroll asked to leave the club after seeing his plea for a new contract fall on deaf ears.

“I disagree [that Carroll was forced out of the club]. He had a contract here for five years, and at some point it would get renewed, but for him to sign in October and it get renewed in January – where would it stop?

“Personally, I’m disappointed. He’s a lovely lad, and I really like him, but it was his decision, and you can’t change that. Was this about football? That’s what you have to ask. I don’t think it was.”