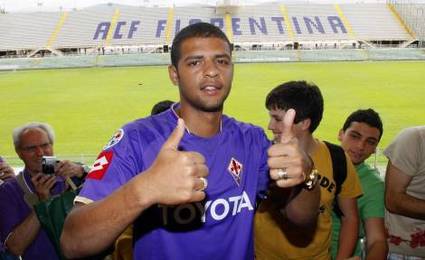 Arsenal could really use Felipe Melo. The 25-year-old Brazilian had a great season with Fiorentina in 08/09, and he’s playing well for his country right now at the Confederations Cup (he scored against the USA).
Melo is the perfect type of player to protect Cesc Fabregas at the heart of Arsenal’s midfield. He reminds me of Gilberto Silva; both men are tall, athletic and powerful, but Melo is more aggressive and dynamic than Gilberto, who was perhaps a little too passive for the Premier League (which is one reason why I think Arsene Wenger overlooked him for the captain’s armband). Melo also has more of an eye for goal than Gilberto, which obviously is a bonus.

Reports last week claimed that Arsenal had waved a Â£15m opening bid for Melo at Fiorentina, but the Serie A club will probably want a bit more before they say yes. If Glen Johnson is worth Â£17m, then a current Brazilian international who has his best years ahead of him must be worth at least as much. Bear in mind that Jose Mourinho is a Melo fan and the player could still end up at Inter.

Melo says he’s more than happy to stay in Florence – which is exactly what a coveted player should say if he doesn’t want to piss off the fans of his current club. Of course, that doesn’t mean Melo won’t leave for the right price.
I think Melo would be a better option than Denilson and Alex Song (both have bright futures but lack experience). If Arsenal have to sell Abou Diaby (who shows flashes of brilliance but is far too inconsistent to play the role of water carrier for Cesc) to fund the purchase of Melo, then I say Wenger should go for it. What say you?