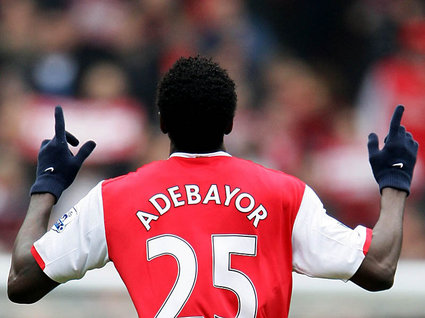 After spending much of last summer talking out of turn about a possible transfer to Milan, it seems Emmanuel Adebayor has learned absolutely nothing.
The player’s agent, Stephane Courbis, has been mouthing off again, on his client’s behalf. In an interview with Calciomercato.it, Courbis talked about Adebayor’s future:
“As of today, I have not even got evidence to speak of presumed interest from Chelsea and Manchester United.
“It’s a given fact that Carlo Ancelotti likes the player seeing that last year he tried to sign him for Milan, although Chelsea have not contacted us.
“We have not received any calls, not from Milan or Ancelotti. Another team has contacted us, but I cannot say anything, it’s a very important team.”

First thing to say: Adebayor is an unbelievably deluded ingrate. No wonder Gooners are desperate to get rid of the dickface and bring in someone who can a) score goals regularly, and b) keep his mouth shut.
Even if Adebayor does want to leave, why does his agent have to air this shit in public? If I was a footballer and my agent talked about my career in public, I’d sack the f**ker. It’s hardly the best way to keep Arsenal’s fans on his side.
And Arsenal aren’t an important team? Without Arsene Wenger and Arsenal, it’s fair to say Adebayor would be a nobody, or less of a star at least.
Gooners, do you want Ade to stay or go?