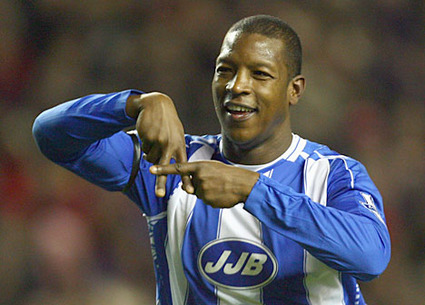 The terrible rumour that Villa fans awoke to this morning claimed that Martin O’Neill is about to sign Titus Bramble. Reports in today’s Daily Star say that O’Neill will offer Wigan Athletic around Â£3.5m, plus teenage midfielder Barry Bannan for the much-maligned centre-back.
As you might expect, plenty of Villa fans are not best pleased with this rumour. A sample of comments on the The Villa Blog:

“Titus Bramble. FFS. This is a piss take surely.”
“The players we are being linked with so far are still way below what is required. Bramble is useless and this must be a joke.”
“Whilst Bramble did put in some very good performances last season, he also put some very bad ones in. I’d prefer any of our current defenders in the team over Bramble.”
“Bramble – just a bulkier Zat Knight in my eyes. One great game, one shocker, then three average games in succession.”
“If we sign Tightarse Bramble I’ll start supporting Kidderminster Harriers.”
You get the gist.
A couple of things:
1) It’s the Daily Star. So there’s a decent chance it’s pure bullshit.
2) Bramble is not that bad. He’s not great, but he’s decent enough. He had some great games for Wigan last season, and if anyone can get the best from him, it’s MoN.