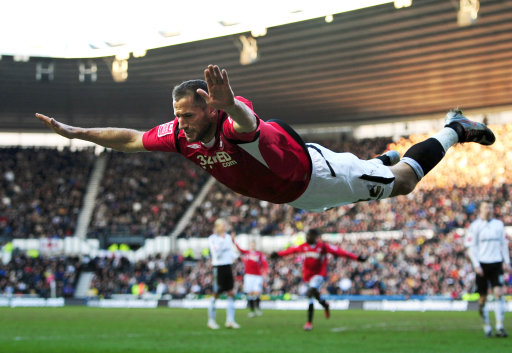 Newcastle United have announced the signing of former Swansea frontman Shefki Kuqi on a short-term deal until the end of the season.

Kuqi will now go straight into Newcastle’s squad for Saturday’s Premier League trip to Blackburn (one of his 12 former clubs) to provide bare-bones cover for Nile Ranger, Peter Lovenkrands and Leon Best.

Said 34-year-old Kuqi on his arrival at St James’ Park:

“I got a phone call from my agent last week who said there might be a possibility to go to Newcastle, and when I heard this I was over the moon.

“In the beginning it was hard to believe, but in the end it all came true.

“I don’t really have the words to describe how happy I am. To get this chance is a massive thing for me.

“I am just happy to be here now and I can’t wait to start and hopefully try to do the best I can for Newcastle United. For me, it is a great opportunity just to be back in the Premier League again.”

The ‘Flying Finn’ had his contract terminated at the Liberty Stadium last month with mutual consent, and had therefore been a free-agent ever since.