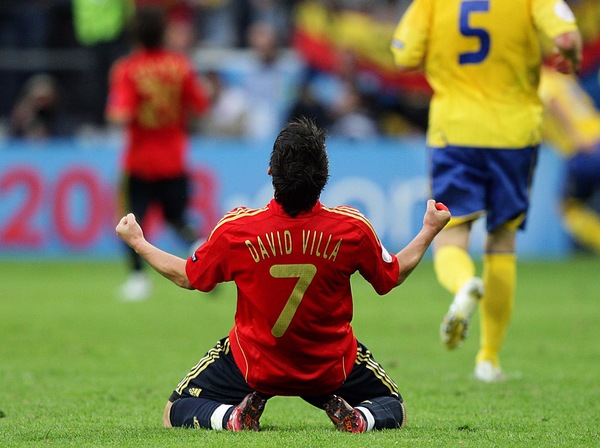 So Nando Torres won’t get David Villa as a playmate. Barcelona midfielder Xavi Hernandez has spilled the beans about the future of the Valencia striker. Xavi told Sport:
“Talking to him [after the Confederations Cup], I noticed that he was very excited at the prospect of coming to Barcelona.
“It is now only a matter of reaching an agreement with Valencia.
“I have spoken with Villa again in the past few days and he is calm because he knows that this is a situation that depends on the clubs. It is complicated but I suppose everything will be resolved eventually and I wish him all the best.”
If both clubs want this to happen, and the player himself – who seemed very reluctant to leave Spain when he had the chance to come to England – also wants it to happen, then it WILL happen, I’m sure.
Barca president Joan Laporta has also confirmed a bid for Villa. He said: “He’s [Villa] a player we’re interested in, and we made a good bid for him, closer to â‚¬40 million than â‚¬50million.”
Ronaldo, Kaka, Benzema, Villa, Messi, Xavi, Iniesta… boy, next season’s Clasico will be absolutely immense, even more of an all-star match than usual. Is there any world-class player left who won’t be sucked into the Real/Barcelona vortex?