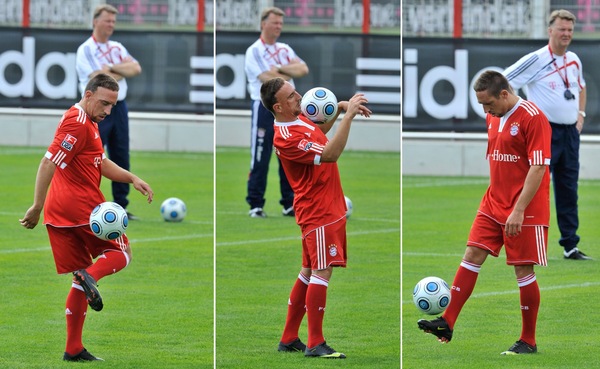 As this photo montage shows, Franck Ribery is back in training at Bayern Munich. But that hasn’t stemmed the flow of transfer toss about Ribery’s future.
Most of Europe’s major clubs have been linked with the wrong-faced Frenchman, and now you can add Liverpool to the list.
This just in from Goal.com:
“Bayern Munich winger Franck Ribery has been repeatedly linked with a move away from Bavaria this summer, with Real Madrid his own stated preferred destination, though a clutch of Europe’s biggest clubs have been reportedly interested at one stage or another.
Liverpool, until now, have not been one of those clubs, but British bookmaker
Skybet, the company who dramatically slashed their odds on Michael Owen joining Manchester United the day before the striker signed for the Old Trafford outfit, have announced a similar cut on the odds of Ribery moving to Anfield.
The bookmakers have cut the odds on a Mersey move for the Frenchman from 66/1 to 8/13 on, after receiving a flurry of bets on the move taking place.”
Hmm, it’s an interesting development, but almost certainly bears no relation to the truth. It’s more likely to be a cheap publicity stunt for Skybet.
Rafa already has the mighty Yossi Benayoun at his disposal (I’m not joking – well maybe a bit), so I doubt he wants to shell out Â£40m on a player he doesn’t really need.
Apart from a few minor tweaks, I think Benitez is happy with his squad, and need to concentrate instead on keeping transfer targets, such as Xabi Alonso and Javier Mascherano.
Vote on this rumour…