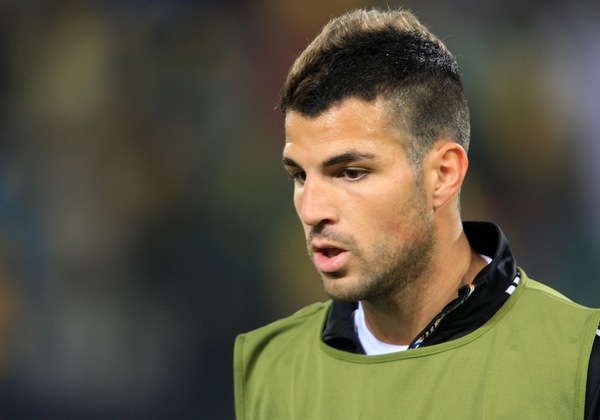 [Photo: PA]
Firstly, let me say that I think Cesc Fabregas is very happy and settled at Arsenal. But that doesn’t mean he’s ruled out moving to Barcelona – his boyhood club – this summer. The two states of mind aren’t mutually exclusive.
The Cesc-to-Barca whispers are mounting, and it’s not as if Barcelona president Joan Laporta is doing anything to silence them. Intead, he’s stirring the pot and testing Arsenal’s resolve.
‘Fabregas is not ruled out as an alternative to Ribery,’ Laporta said this week. You all know that if Barca come up with the right offer, Arsene Wenger would have to let his skipper go; Arsenal’s gaffer did it before with Thierry Henry, and I don’t doubt he’d do it again (the main difference being that Fabregas has his best years ahead of him, while TH9 was nearing the October of his playing career).
How much would it take to persuade Arsenal to let Fabregas go? Â£45m maybe? Who knows exactly -Â only the parties involved.
Where do you think Fabrgas will be come the start of next season? Vote below or leave a comment…

Finally, I refer you to Arseblog’s wonderfully ranty take on Laporta’s character, which features this gem:
‘Speaking exclusively to El Blogdo Mongativo smarmy Laporta admitted what the world has suspected for years. “I know this will be hard for people to accept but it’s true. I’m a complete and utter cunt. I’ve been a cunt for years”.’