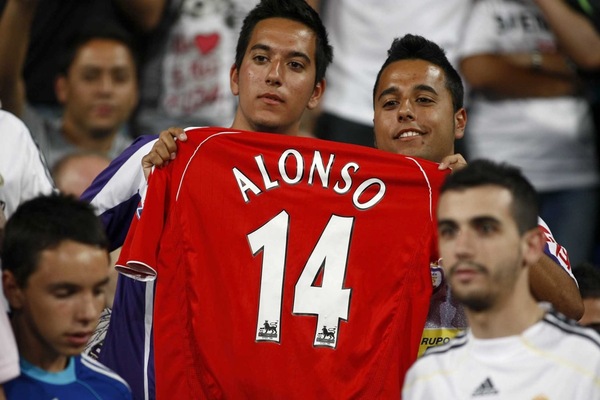 A Real Madrid fan holds up a Xabi Alonso Liverpool shirt during a recent friendly between Real and Al Ittihad at the Bernabeu
Xabi Alonso is one of those players who even most non-Liverpool fans have a sneaking (or open) fondness for. I’ve heard several fans say they think Xabi is overrated but I’ve never heard a fan really tear into Alonso. And several supporters I know adore Alonso, who is a proper footballer, not one of those crop of modern players who makes up for his lack of ability by relying on his superior athleticism.

Imagine if Steven Gerrard had been at the centre of a “will-he, won’t-he?” transfer tussle with Real Madrid throught the summer, as Alonso has been. Fans would be questioning Gerrard’s loyalty. There would be a heap of critisicm. But in Alonso’s case, I’ve not heard anyone come out and slag him off for holding out for a move to Spain.
Yet Xabi’s silence on this matter has been just as deafening as that of John Terry’s; the England and Chelsea skipper eventually turned down a move to Man City and then had the nerve to claim he was never, ever going to leave.
So if Terry is branded disloyal or greedy, how does Alonso’s whiter-than-white reputation remain intact? Is the Spaniard not guilty of the same dallying?
I suspect it’s a simple matter of popularity. Many non-Chelsea fans despise John Terry, whereas Alonso is widely respected and liked.
Would be interested to hear Liverpool fans’ take on the Alonso situation. At time of writing, Alonso’s future was still unclear, with Rafa Benitez reportedly asking his player to make his mind up asap. Real Madrid, meanwhile, don’t want to pay more than Â£30m for Alonso. (I’d value Alonso at Â£25-28m.)
Anyhoo, comments please…