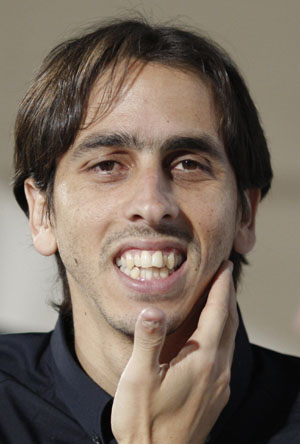 One of a whole gaggle of new players to join Arsenal on transfer deadline day, Israeli captain Yossi Benayoun has taken little time in celebrating his loan move from west to north London.

On hearing that he will have the No. 30 jersey at the Emirates, rather than the No. 15 he has for Israel (and had for Liverpool), the midfielder has decided to show off his impressive intellect with an excited Tweet – “my number in Arsenal will be 30….twice 15”.

While a good basic grasp of maths is something to be proud of, the new Arsenal playmaker will need to be careful. Remember Graeme Le Saux, another “intellectual” Chelsea player whose penchant for reading the Guardian alienated him from many fans and players?  Benayoun would be well advised to retain a certain level of humility in revealing his gift with numbers. However, if he does ever feel excluded from envious and threatened team-mates, he can always call upon “Britain’s Brainiest Footballer” Clark Carlisle, he of “Countdown” fame.

One imagines that as well as performing on the field of play, Benayoun may also be drafted in by the Arsenal board to help both manager and players understand that 1 point + 0 points + 0 points after three games = a totally rubbish start to a season.