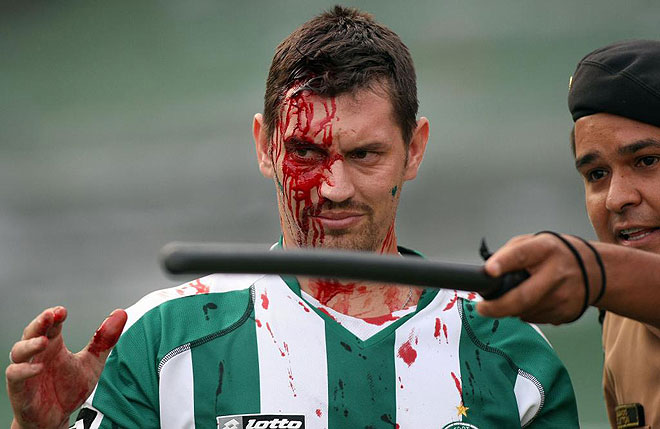 A Coritiba fan looks worse for wear after scuffles with police

Some fans take relegation well, with a shrug of the shoulders or a few tears. Not in South America though, where relegation can be greeted with a carnival of violence.

Such was the case in Brazil on Sunday, when Coritiba ‘welcomed’ Fluminense to the Estadio Couto Pereira. The teams drew 1-1, a result that was good enough to save the relegation-threatened visitors but – you guessed it – also consign Coritiba to the second division.

Here’s how the final table looked at the wrong end:

With Botafogo’s shock 2-1 victory over Palmeiras, a win would have been the only result to save Coritiba and doom Fluminense.

So you can understand why Coritiba’s fans were a teensy bit upset with the way things worked out, especially as two Rio-based clubs – Botafago and Fluminense – survived. And by teensy bit upset, I mean this:

That’s right folks, a good old-fashioned South American pitch invasion, which left one policeman unconscious, needing to be airlifted from the stadium by helicopter.

When the dust settles, it will be interesting to see what punishment is meted out to Coritiba for its fans despicable behaviour. In England, this sort of thing might see a club being demoted two divisions, rather than one, but mental pitch invasions seem to be rather more the norm in Brazil.

At the other end of the table, it’s only fair I mention new champions Flamengo, who won their first title in 17 years after a 2-1 win over Gremio. Congrats. Btw, Gremio’s fans will be delighted to have lost that game, as it meant bitter rivals Internacional missed out on the title.

“Tidy. But why do all those Brazilian bufties fight with their feet?”