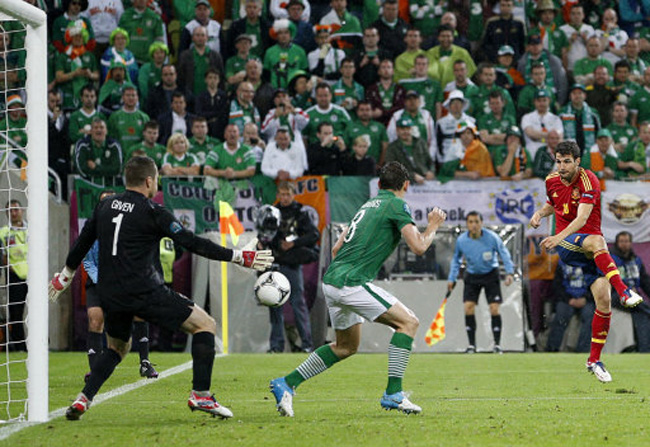 In Gdansk against Spain, Ireland’s fans were superb once again, but alas, the 11 men on the pitch failed to perform to the level that had got them to Poland in the first place.

The 4-0 scoreline didn’t flatter the Spanish at all, with Fernando Torres opening the scoring after just four minutes, courtesy of some dreadful Irish defending. The Chelsea man would eventually secure his brace on 70 minutes, after David SIlva had put La Rojo 2-0 up early in the second-half while a last Cesc Fabregas piledriver finished off the rout.

Disappointingly from an Irish perspective, poor Irish defending had a hand in every Spanish goal, with the previously reliable Shay Given beaten too easily on a number of occasions.  Stephen Ward was also at fault on numerous occasions while the remainder of the Irish backline, John O’Shea, Richard Dunne and Sean St Ledger creaked all evening.

However, when the likes of Paul Green are on the bench (and brought on towards the end), you know that the disparity between the Irish and Spanish sides is going to be practically limitless.

For the Irish, getting to Euro 2012 was a superb achievement. Making it out of a group with Spain, Italy and Croatia would have been beyond the realm of the miraculous.

As for Spain, they still need to overcome a handy Croatian side if they are to be sure of making it to the knockout stages.