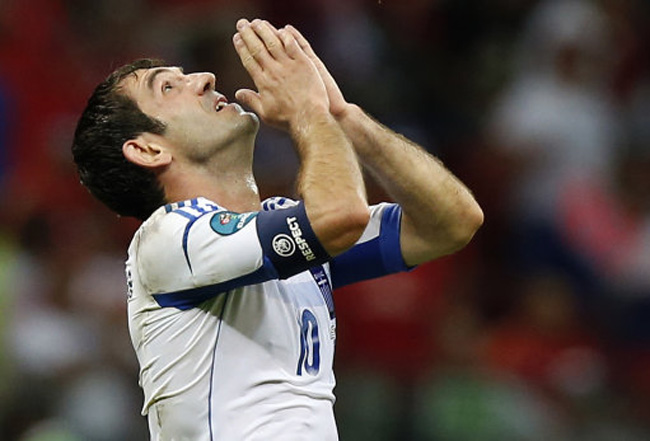 Greece pulled off a genuine shock in Warsaw on Saturday night, defeating group favourites Russia 1-0, a result which put the unfancied Galanolefki through to the last eight at the expense of both Russia and hosts Poland.

Russia came into the game knowing that a draw would be enough to see them through, but despite the prompting of Andrei Arshavin and Alan Dzagoev, they couldn’t get that vital goal.

Star of the show was the Greeks was veteran playmaker Giorgos Karagounis, who bagged the only goal of the game on half-time.

After the break, the former Inter Milan midfielder should have earned his side a penalty kick after he was blatantly tripped in the box. However, referee Jonas Eriksson made a right dog’s dinner of the decision, erroneously booking the Greek captain for diving instead. That booking sees the legendary schemer miss the knockout stages.

As for Russia, they badly missed a proper world class centre-forward, with the likes of Pavlyuchenko, Kerzhakov and Pogrebniak all unable to produce a moment of magic.

So the unfancied Greeks go through to the last eight (along with the Czech Republic) while Russia go home (along with Poland) after a thoroughly inconsistant tournament.