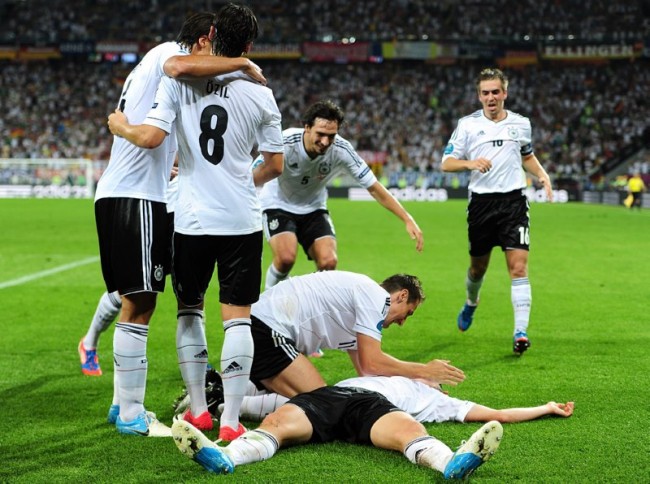 The permutations beneath them were myriad but the mathematics ahead of last night’s concluding Group B fixtures were incredibly simple as far as Germany were concerned: a win over Denmark in Lviv would take them through with a flawless 100% record and win they jolly well did – Lars Bender sticking away the winner on his full international debut to see off Denmark and set up a quarter-final tie against Greece *something something Eurozone something something Merkel*.

Lukas Podolski opened the scoring after 19 minutes on the night he reached the 100-cap mark for Germany (the youngest European player to do so, aged just 27), though Michael Krohn-Dehli equalised for the Danes just six minutes later.

What followed was just over an hour of superb, elegant German midfield dominance, with Sami Khedira, Mesut Ozil, Bastian Schweinsteiger and Thomas Mueller playing some of the sweetest possession football you’re ever likely to see before Bender hurtled 70-odd yards upfield, pounced on Ozil’s over-egged throughball and slotted away the winner with ten minutes left to play.

While we’re here, anyone out there fancy having a guess at the youngest ever player (hint: he was only 24-years-old at the time) to reach 100 international caps? Be warned, it’s a bit of a snorter.