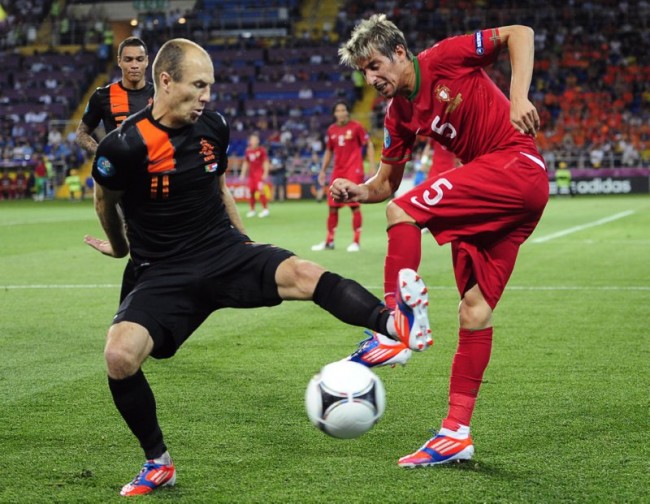 “Everybody do the Duck Walk!”

Well, that’s Bert van Marwijk out of a job then. Ten early minutes of masterful control culminated in a fantastic Rafael van der Vaart curler from the edge of the area to put Holland within one goal of the winning margin required to stand a chance of making it out of Group B alive, but a Dutch side top-heavy with at least one too many squabbling, diva-ish malcontents soon reverted to type – gradually dissolving into a fine mist while allowing Cristiano Ronaldo to step into the breach, get his arse in gear and finally put in a shift befitting his imperious domestic season.

Sensing the weakness in a resolutely average Dutch defence, Ronaldo’s interest was piqued – pulling Portugal level after half an hour, putting the finishing touch to Joao Pereira’s delicately incisive throughball, tear-arsing up and down all night and giving Gregory van der Wiel seizures before sticking the winner past Maarten Stekelenburg in the 74th minute – stepping inside to give Nani’s beautifully measured low cross the finish it deserved as Holland dwindled to the square-root of nowt.

Next up for the Portuguese? The Czech Republic. Next up for Holland? A whole boat-load of finger-pointing and self-pity plus – one would assume –  a P45 in the post for Van Marwijk.