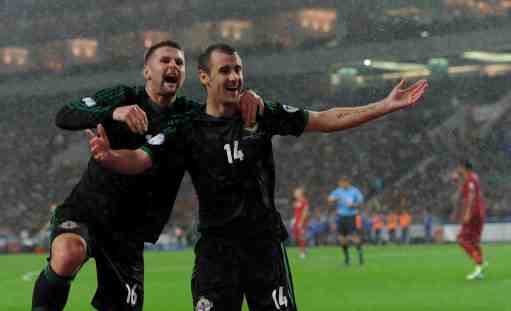 Norn Iron fans haven’t had much to cheer about in recent years, with a constant stream of young talent heading south  to represent the Republic and results not getting any better. However, faced with a bloody difficult away tie against the mighty Portugal, Cristiano Ronaldo and all, the Irish almost secured an incredible win.

Aberdeen’s Niall McGinn was the goal-hero for Michael O’Neill’s men, netting on the half-hour mark, courtesy of a fine chip. And while the home side dominated for the vast majority of the game, the visitors were resolute in their defending. Up until the 79th minute that is, when veteran striker Helder Postiga, a player who never looks good enough to be on the same pitch as the likes of Ronaldo, fired home to save Portugal’s blushes.

Still, a fantastic result for the North and one which will hopefully kickstart their World Cup qualifying campaign.