Jese Rodriguez, a 19-year-old striker in Real Madrid’s Castilla side, has been forced to apologise for shaming the club after a disgraceful display during a recent game against Sporting Gijon yesterday afternoon.

After going down under minimal duress in a challenge with Gijon’s Ivan Hernandez, Jese retaliated petulantly when Gregory Arnolin swatted away his flailing legs by kicking out at the French defender and duly being shown a red card by the referee – all this in the 17th minute of the match!

The worst was yet to come however because, as Jese moped off the pitch, he turned to hock a bit grotty snotball at Gijon midfielder Nacho Cases, who had had the temerity to pat the uppity Madrid urchin on the back as he walked past… 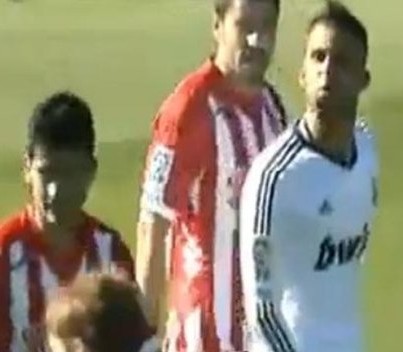 Rodriguez later took to his Twitter account to apologise profusely to everyone he had let down, saying: “I want to apologise for my actions today. To the club, the president, my teammates, my manager and fans. Will not happen again.”

Apologising to everybody except the poor chap he spat on then. Lovely stuff.